Arclay News:
Our 2006 research has demonstrated very interesting results in how the Arclay Mineral Suspension Technology has been effective in

Cornell University 2006 Research excerpt as presented at the NY State Fruits and Vegetables conference:
‘’Arclay provided control of common scab. It was significantly better than the control, than three of the four Plant Shield treatments (Treatments 4, 5, and 7), and comparable with the remaining treatments. Arclay also performed well for black scurf. Although it was not significantly different from the control, it provided control comparable to the Maxim MZ treatments, and only Moncoat MZ and Maxim MZ + Amistar 80WG performed better. The effect of Arclay on black scurf control would have been even more dramatic if the highest black scurf ratings were not localized to only one of the four replications. Arclay was also significantly better than the control in terms of silver scurf and was comparable to the treatments using Maxim MZ at 8 oz (treatments 9 and 11).

Arclay, Amistar 80WG, and Platinum Ridomil Gold were applied as in-furrow sprays while the seed pieces were in the ground but still uncovered. The Arclay treatments received no foliar fungicides.’’ 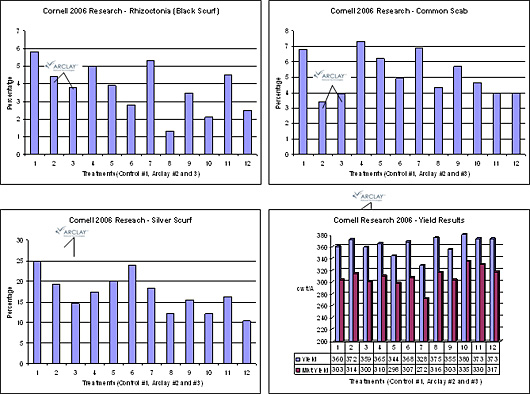 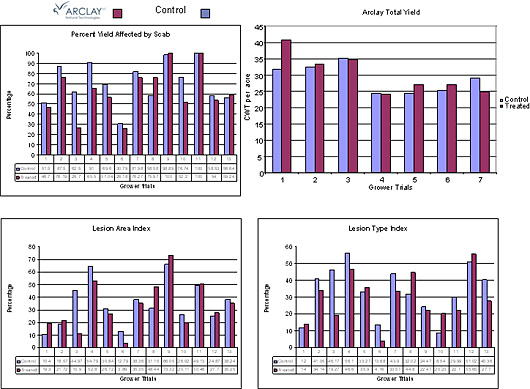 Cardinal and Racz
2003, 2004 and 2005 trials demonstrated the potential of clay suspension technology in controlling scab causing pathogens. Tuber #1A is an example of the effect of the product on reducing the incidence of scab. This empirical data was observed in a grower field located in Quebec, Canada.

Empirical Observations – In vitro study
In vitro study in 2005, showed promising results in treating the soil and tubers. Infected soil and tubers were loaded in 5 gallon containers and the soil of each infected tuber unit was sprayed 3 times. First application was sprayed on February 26, followed by March 6th and April 24th, 2005. A total of 5 infected tuber units were studied. Pictures are presented below.